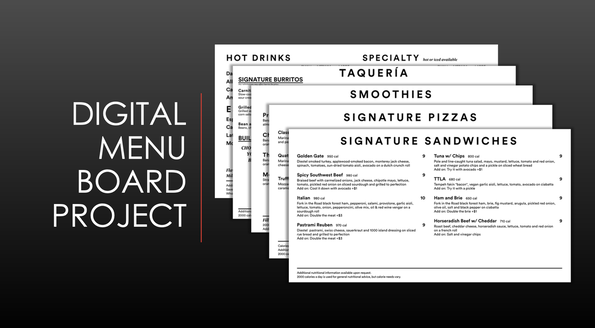 My first large-scale project in my time with Whole Foods was to update the creative for and improve the process behind the digital menu boards at each prepared foods venue.

Previously, these boards were static images, requiring a lengthy production and review process to implement changes. There was also a lack of direction for store teams to troubleshoot when the boards malfunctioned.

I worked with the vendor who manages these boards (Mood Media) and implemented a template system based on brand standards, allowing for the content to be directly entered into Mood's CMS. This
​is now the SOP for stores across the country.

My role at the PGA TOUR involved hands-on production from conception to delivery. This included a significant travel schedule, daily strategic meetings and reach out to external brands for partnership.

For the accompanying media, I managed our cameramen, worked with the talent, facilitated an exchange of footage between production crews, logged action, oversaw the editing process and strategized around posting to social channels and PGATOUR.COM.

In addition to the media below, my role included social posting, copyediting articles for the website and sourcing talent for shoots. 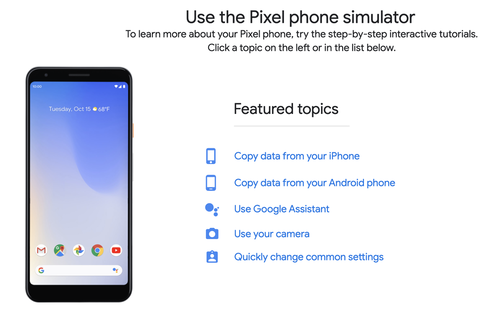 In coordination with the launch of their latest Pixel device, Google contracted an agency to build interactive tutorial modules to assist users in on-boarding to the phone.

I was contracted to handle this project, in addition to the videos above. This production process included topic selection and vetting, coordination between myself and the agency on look and feel, extensive reviews from product teams to pinpoint correct functionality, frequent stakeholder communication and localization efforts.

These 33 modules, originally produced in English, were also localized in Japanese and German, which necessitated coordination between myself, the Japanese and German Google product teams and the agency. These 99 deliverables launched ahead of the phone being shipped to users.